Lowballers gonna Lowball! Moving out of California? Where did everyone move?

Lowballers gonna Lowball! Moving out of California? Where did everyone move?

update your home value: https://hmbt.co/bT7qRJ
Good morning, happy Monday. I was texting my friend from seventh grade. The first, when I moved to Cupertino, the first person that came up and talked to me was Chandra. I was putting on this big, huge decal. It was like this big K on my binder. And he's K Dr. Demento. And that sparked our friendship for many, years.
It's been way too long. Chan Permaul. Happy birthday. Happy 28th birthday. All right.

Today's talk is about lowballers are gonna low ball. That's just the way it's, and in this market, you're going to get a lot of houses that get offers with lowball offers, even times. Crazy. It's hot, like the crazy market.
You would get low offers because the sellers would, or the buyers would say what the hell? I don't care. What's, it's going to cost me 20 minutes. Fill out the form and put understand. That's, here's the thing, there are still buyers that are out there that are willing to pay a good price for a house, and I understand that now, today it's a good time.
Buyers to take advantage of this market. There are a whole lot fewer buyers in the market today. I can attest to that. I had open houses this weekend. We had it on Saturday, and I hosted it on my listing down here in Blossom Valley. We'll show that in a minute. I had 13 and then yesterday, during the rain, during the down, we had eight sets of people, which wasn't 50, 60 sets of people.
Those days are no longer happening. At least I think until the market comes back or what have you. But right now the market is resetting. We're contracting prices a little bit, which we have. We're seeing houses stay on market a little bit longer, but good agents know how to negotiate and work together and come together so that buyers and sellers.
Thinking about moving to Willow Glen San Jose?
https://youtu.be/LQgOUjf2QCc
you're not going to get $500,000 over the asking price. And quite frankly, I don't think that was fair to buyers back then. It's what it is. I understand. But when you get caught up in the heat, you wind up spending half a million dollars more for a house. There will be some buyer's remorse. And I can tell you that right now, we're seeing the repercussions on that back end where some buyers are saying, Hey, I feel like I was coerced, or I felt like you pushed me into this.
And that's kinda why I never push people into houses. Cause I want to make sure that we're going to get them into the right house for them at the right price. And I don't believe do that. Just don't do that. I'm not hearing nicknames. It's, like the wild, west right now because there's no definition of what rules are working and there's no definition of, rules that are, not working.
So I have offers on both my houses that I have listed. I have another listing that's coming up I'm working with right now. And we're writing offers and we're trying to negotiate and try to work in. The best thing for agents to do is to get on the phone and talk. Today
is what it is. It you can't do that cause you can't just call 40 people in 30 minutes. It's just not. Today we have a lot less going on. It's slower. We take the time to work and build rapport and understand if we could trust the agent on the other side because that is hugely important right now. After all, houses are falling outta contracts.
I don't have this little spidey sense that I can't trust her or him or whatever. I will let my sellers.  I've been on the phone all day. I've been up since the five 30 meetings. I've calling what?
and I need to talk to those agents. I need to talk to people so that we have those conversations we have that rapport and we can build the trust that we know that we'll make it easy and smooth for the buyer and the seller. And that's important, especially in a year or two. We need our foundation of serving us.
I see that's not happening a whole lot with other agents, but that's okay. That's not really what we're here to talk about. I'm getting listing, I'm getting offers. I have insultingly low offers on my houses, and on my listings. And not that I get insulted. I don't, but my sellers will get insulted, especially if it comes in at $200,000 less. 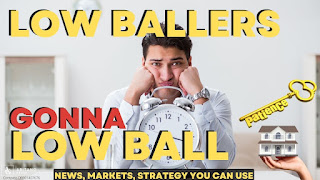 I. You're testing the waters. But here's the thing, if you're going to insult somebody like that, chances are they will not respond. And what that shows me and my sellers is if you're writing an offer like that, you are not coaching your client as to what a responsible and respectable offer is so that you can actually make that happen.
So when you throw in that offer, and I see that I go right away, I make a judgment, that person. Desperate for work. They will do whatever they can Understand that looks like a feeling of desperation.
You take the money and you stack it away 10 times. And that's just the way it's, you run a business and that's real. That's real estate 1 0 2. When you're finally up and running business, getting business, you take a chunk of that money and put it away for a rainy day,. Hopefully, it's not super rainy today.
I went back up in the mountains this weekend and it was, it's such so nice and beautiful up there. We saw this one house and. My clients almost fell into the house cause of the cat. This cat is just attached to everybody. Such a friendly cat. So funny. And he just wanted to be around everybody.
The husband started walking through a ravine and the cat followed him. I was like, man, that is such a cool cow. I wish I had, my dogs did that. My dogs don't follow me.  they do. I'm just teasing. So it's, it was a really fun time and it was wet. It was all get out, but not as, it has been. I've been out there where my entire I, was stretched all the way down to my undergarments, just, yeah, crazy.
And I have right here just kinda part of what's going on. So going back to the listing, you're offering, that's what the title this is, right? If you're dropping a low offer, you need to find out a little bit more about what the sellers are about if they're in a desperate situation and the market's in for, I dunno.
And they need to sell. They have some sort of motivation to get into it. But if you drop a low offer in five days and the seller doesn't have to sell I you have more than five in the house, you don't have to sell. There's no's, no reason. Basically, smacking gloves and talking across the face of the person that you're trying to buy something.
And that puts a big blind in the sand saying, I'm not going to deal with you. Thank you. But no thank you, but no response. And I understand, I totally understand. It's a negotiation point. I don't get emotional from it, but a seller will get emotional from it, and it's not really a thing. It shows us that you're, Experience in this market and you're figuring, Hey, I'm just going to throw out 15 offers and one of them's going to stick. 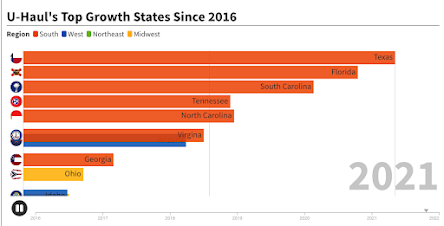 These States Had the Top Growth for U-Haul Moves in 2022
Absolutely. But you're also creating a name for yourself, so just keep that in mind. Yeah, there you go. Oh, so the last thing, and I know this added this right here, I wanna share this with. Really quick, these states have the top growth and I'm going to share this with you. Hang on. There we go. There you go. Had the top growth for U-Haul outta California, or not just California, but out ot different states.
I was a really fun little Graphic for you to take a look at, and see how and who's growing where. Maybe that'll give you an inkling if you're deciding to move outta California for whatever reason or move outta state or whatever state you're in. Those are the top three different areas people are moving to.
Tennessee actually fell back for a little bit. That's weird. Their parents moved to Tennessee. I have brothers that live in Alabama and Georgia. I have a lot of friends and agents that I know that live in Georgia and Florida. A lot of people are moving to Texas, but where people are really moving, it's not hugely talked about.
Here in Idaho, there's Ohio, Indiana, that's all. There's Idaho a little bit, just a little tiny bit. I got a little popular there for a bit, so I can calm that down. But yeah, so the idea here is people are moving out and it's not just California, it's people aren't just mass exiting out California.
Some people are moving out from other states, Montana, maybe they don't like the mountains, and they wanna go to Arizona. Who knows? But those are the top few places people move to. Amazingly, Tennessee got so popular. That's actually about when my parents moved to Florida and you who?
And one of the things that stuck in my mind was the high-cost taxes. You're like there's no income tax. No there's not. But there's high sales tax and high property tax. You proposition 13, which keeps it at the price paid plus two. Yeah. Percent growth. Every year there's a homestead thing where we have to turn 55.
I'm not an expert in Florida. . But if you move to Florida and you're of age, then your, price, the cost basis, and your taxable basis stops accumulating. And I think that's the same thing in Texas too, which is why Texas is very attractive to a lot of people. You save on property tax, you save on property tax is a lot more expensive.
That's it! We'll see you tomorrow-

If you are moving ANYWHERE in the world - Let me know! I know a LOT of AMAZING Agents!

VydeoEase.com- video post-production service for business marketers. $5 trial- Use Vito50 when you sign up…

"Now is the time to ask sellers for concessions. We have a system that helps our buyers buy homes for less and with terms that work for them. Buyers are still buying, we're still putting people into homes. Sellers need to sell and smart ones know that they have to give a little today.
"This isn't April 2022 anymore. Inflation, higher rates, Stock uncertainty, higher cost of living, and Unemployment looms. This wasn't the case a few short months ago. Today if you need to sell, sell. If you need to buy, buy.
Contact Info@abitano.com to learn how buyers are turning into homeowners on there terms today"

Bay Area TRENDS - Where is everyone moving | Average Cost of bay area counties.